There were plenty of people and plenty of games played at our November meeting, even though it was quite a bit colder than October.

The first game I played was Dune Imperium, and the desert setting made a nice contrast to the autumnal setting of the hall. We also had games of Ra and Space Cadets.

It was my first time playing Dune Imperium and it went well. Things were very tight at the beginning as everyone was scrabbling over the few opportunities to gain water, and there was some in-game recalibration as we worked out the relative importance of the different resources. The combination of worker placement and deck building worked well, but I think I got sidetracked by buying too many cards. I liked how the objectives each round nudged us towards changing priorities as the game went forward, with the battles becoming more important as the game progressed. It's a game that would reward a repeated play, and a bit more focus on a single strategy.

Space Cadets seemed to be a long game, but fun. All the players are different members of the bridge crew of a Star Trek-type ship. Each has a different station and each has their own timed mini-game. It seemed to take a while to learn, with each station being different, but mostly fun.

Later on we had games of Yellow & Yangtze, Teotihuacan, Steam Watchers, and Star Colonies, a game being developed by one of our members. After Yellow & Yangtze we played another Reiner Knizia game, Poison. I was a bit disappointed I missed Teotihuacan, as it's a game I like a lot, but I had fun with the games I played.

Our next meeting is on 11 December, which will be our Christmas extravaganza! We'll have the now-traditional game of Pitch Car with loads of prizes on offer.

Please sign up to the meeting on our Meetup page so we can keep an eye on numbers.

Wargames Workshop in Milton Keynes has kindly contributed to the prize fund. If you have some unloved games at home that you'd like to donate, we'll be more than happy to add them to the prize table.

We look forward to seeing you then! 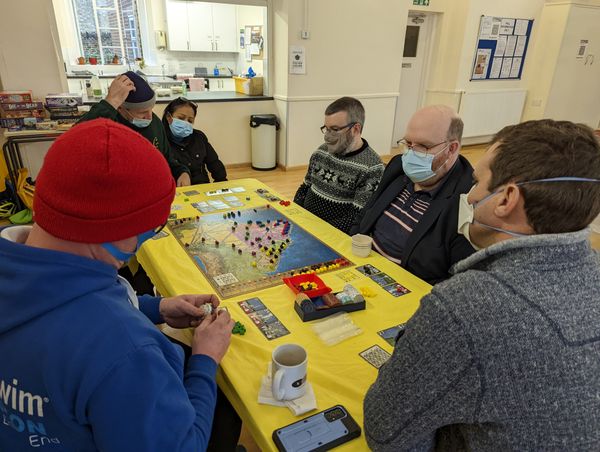 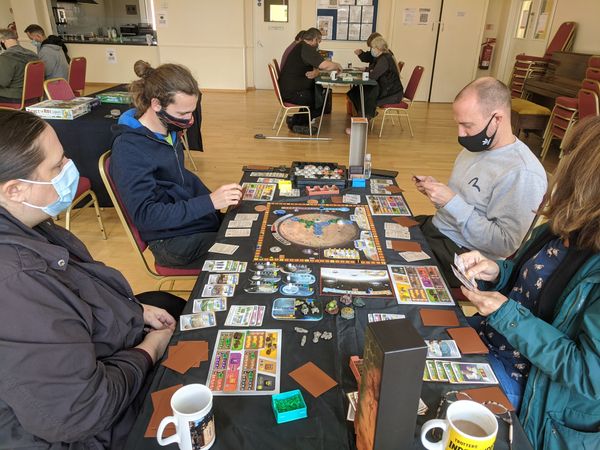 Another successful and popular in-person meeting.