We had another fun and game-packed meeting in October. The games got going rapidly in the morning, with Through the Ages, Energy Empire, Village, Rising Sun, and Arboretum hitting the tables early.

I was playing Village for perhaps my second time, but if I had played it before it was so long ago that I couldn't remember anything about it apart from the need to have your workers die of old age to score points. It's a variation on a worker-placement game; rather than placing your workers on spaces to perform actions, you pick a resource from a space to perform that action. Often those actions involve placing a new worker, which makes subsequent actions cheaper.

There's also a "clock" on you player board. Some actions require you to spend time to complete an action, or spend time instead of using a resource. When your clock completes a cycle, one of your workers dies and goes in the graveyard. You get points at the end of the game based on the number of workers you've got through.

Once we got going, it was a fun game. At first, I was just overwhelmed by all the options available, with no clear idea of what was a good idea or not. By the time I'd managed to work things out, I was just that little bit behind the others that I finished the game last. But it was a fun time and a game I'd play again.

In the afternoon I manged to persuade a few others to play Teotihuacan, which was the first time I'd played it for a while. We also had Cockroach Poker, Keyflower, Dominion, and Terraforming Mars. The group playing Through the Ages even managed to finish before the end of the session, with enough time to play a game of K2! Quick games of Skull and Love Letter filled the odd gap and gave people's brains a chance to rest after some of the heavier games.

It was my first game of Teotihuacan with four players, and it did change the strategy a little bit. The game involves moving your workers (the dice) around the board. In each turn, you move one worker up to three spaces clockwise. When they arrive at a space, you can either take cocoa (the equivalent of money), take the action on that place, or lock your worker to get advance in a temple and gain a bonus that way. The more workers already on a space, the more cocoa you gain, or the more cocoa you have to spend to do the action. Locked workers are unavailable until you pay cocoa to unlock them, or they're bumped out by someone else.

The actions are typically to collect resources (stone, wood, and gold) or to spend them building pieces of the central pyramid or adding decoration to it. Adding to the pyramid gives you points immediately and bonus points in the three scoring rounds. There are other actions to tweak your effectiveness, and there are some Discovery tiles that give small but one-use bonuses, some of which can be very useful at the right time.

Actions are more effective if you have more of your own workers on the space, meaning it's sometimes useful to group your workers in one place for a powerful action, even though that will slightly limit your options in the turn or two afterwards.

With four players, there's more demand for the locking worship spaces, so they become easier to use: there's a good chance that your locked worker will be bumped out by someone else wanting to use the space, meaning you don't have to pay to unlock it. In fact, that turned out to be the winning strategy in this game.

In practice, the game was a little slow at the beginning, a combination of people learning the different actions they could take. But once we got used to things, the pace was high. Each player just does one little thing on their turn, then it moves on to the next player. Most of the time, the board doesn't change that rapidly, so you can plan your action while others are taking theirs.

It's a game I like and I'm keen to play it some more.

Don't forget, our next meeting is on 2 November. See the calendar for all the upcoming dates.

What was your favourite game from the day, or what would you like to play? 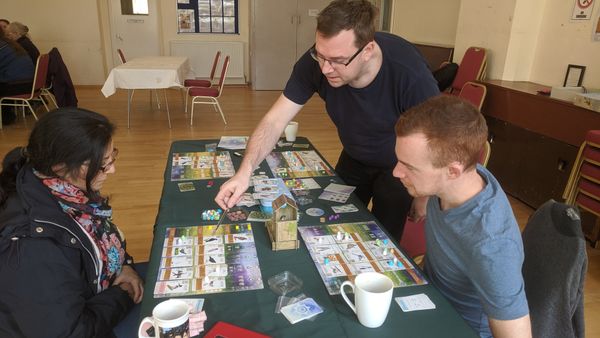 Reports and photos of our November meeting, including Neil's thoughts on Wingspan. 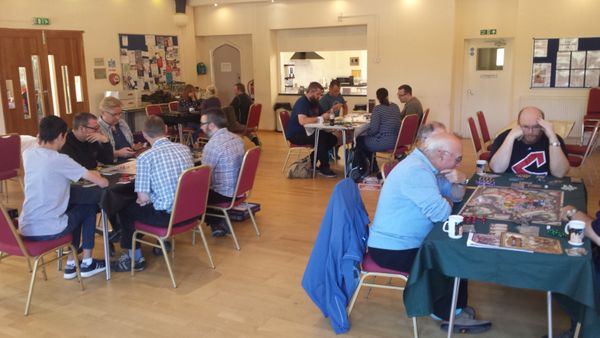 Penny's thoughts on our September meeting